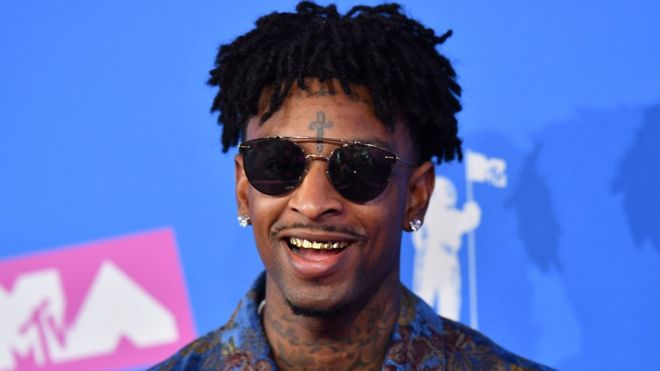 Rapper 21 Savage, was arrested on Sunday in the southern part of Atlanta by US Immigration officials, who said he is a British citizen.

21 Savage whose real name is Sha Yaa Bin Abraham-Joseph, has long said he is a local act from Atlanta, the state capital of Georgia.

According to US Immigration and Customs Enforcement (ICE),  spoke man Bryan Cox, 21 Savage is a UK citizen who came into the US as a teen in 2005.

“unlawfully present United Kingdom national who entered the United States in 2005 on a visa that expired one year later.

“Mr. Abraham-Joseph initially entered the U.S. legally in July 2005 but subsequently failed to depart under the terms of his non immigrant visa and he became unlawfully present in the US when his visa expired in July 2006.” he said.

He also said the rapper had been arrested and later convicted for felony drug charges in 2014 but at that time, they did not know he was not a citizen.

“In addition to being in violation of federal immigration law, Mr. Abraham-Joseph was convicted on felony drug charges in October 2014 in Fulton County, Georgia,” the statement added.

“Mr Abraham-Joseph is presently in ICE custody in Georgia and has been placed into removal proceedings before the federal immigration courts.

“ICE will now await the outcome of his case before a federal immigration judge to determine future actions.” the statement read.

The rappers lawyer, Dina LaPolt told Variety that they are working hard to get the rapper out of jail.

“We are working diligently to get Mr. Abraham-Joseph out of detention while we work with authorities to clear up any misunderstanding.

“Mr. Abraham-Joseph is a role model to the young people in this country, especially in Atlanta, Georgia, and is actively working in the community – leading programs to help underprivileged youths in financial literacy” LaPolt said.