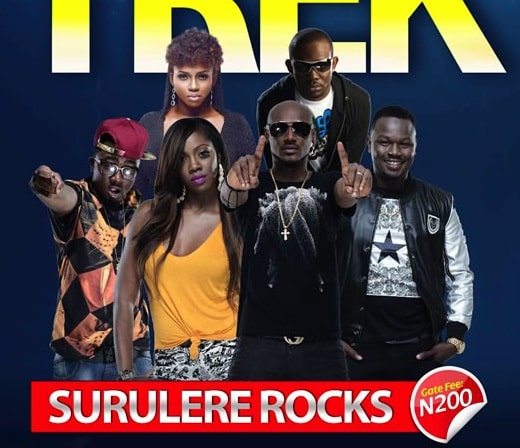 Thousands are warming up for a sold-out National Stadium Concert!

After nine exciting weeks across the country, the Star Music Trek train finally berths at the National Stadium Surulere on August 10 for what the organisers confirm will be the most exciting grand finale of the year.

Headline artistes 2face Idibia, Tiwa Savage, Ice Prince, J Martins DrSID and Waje -with a bonus reappearance from Wande Coal – are set to thrill music lovers who have been keenly following The Trek from June 8 2013 when it first held in FESTAC, Lagos.

According to 2face, who debuted on The Trek in Asaba, the Grand Finale promises to be one worth attending, what with the talented acts set to perform and the massive surprises prepared for fans.

“Asaba was awesome but trust me, you can’t beat what we have in store for our fans on August 10 at the National Stadium. Just imagine all the ‘Treks’, from FESTAC right down to Agege all wrapped on in one massive Grand Finale! Trust me it will be awesome,” the singer enthused.

“Performing at each Star Music Trek Concert is always an amazing time for me. I’ve been missing my fans since Lokoja, so, yes, I’m most definitely looking forward to seeing them again on Saturday,” Ice Prince admitted.

Also performing for the second time, beautiful songstress Tiwa Savage noted that, “Truthfully, it’s been really exciting. This will be my second time performing on the Trek this year but I’ve been watching the concerts from city to city. You just cannot beat the energy and passion Nigerians have for good music.”