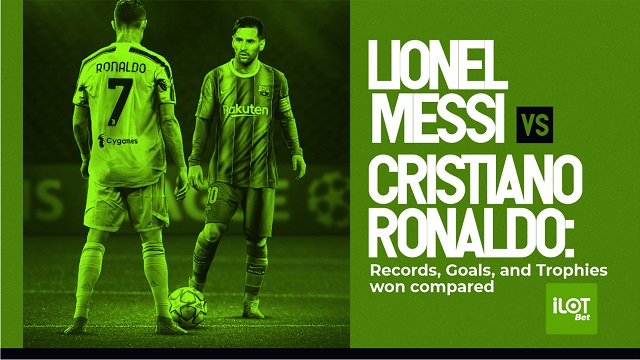 Two of the greatest football players have ever seen are in the latter stage of their careers and have achieved great success along the way.

Lionel Messi and Cristiano Ronaldo have brought so much joy to our television screens for most of their careers. Their media and fan-fuelled rivalry have been fascinating to watch. In sports betting in Nigeria, fans are always sentimental towards whichever clubs and countries these football stars are a part of.

Both born with natural talent and a never-say-die attitude, Messi and Ronaldo have plundered ridiculous numbers throughout their careers. They have smashed every record they have come face-to-face with whilst winning countless trophies between them.

Manchester United’s Ronaldo has proven himself in three different leagues in three countries. At the same time, Messi was a constant mainstay at Barcelona before last summer’s move to PSG, yet no matter where they’ve been, they’ve never let anyone down.

Here is all you need to know about their incredible careers and the success they’ve had.

Messi has always bled the colours of Barcelona. After coming through the academy ranks, he went on to spend the first 17 years of his career at the Catalan club, going on to make a total of 778 appearances across all competitions that began with his debut in 2004-05 and ended with his final game in 2020-21.

He made the most appearances during the 2011-12 seasons, playing 60 games in all competitions.

Following his ground-breaking transfer to PSG last summer, it took a little while for Messi to come into the fold, but he made 34 appearances for the French club during his first season. He has since featured 10 times in the 2022/23 campaign to take his career total to 822 appearances, and he will continue to break more soon.

Ronaldo has been around for slightly longer than Messi has, what with being two years older than his rival, and has therefore played more games since making his debut in 2002-03 for Sporting Lisbon, and has since totalled 941 appearances in all competitions over 21 seasons for four different clubs – including two spells at Man United.

His most appearances in a single season came in both the 2011-12 and 2012-13 seasons for Real Madrid, appearing 55 times in both campaigns.

Messi made his international debut for Argentina in 2005 and has represented his nation every year since, despite initially retiring after their Copa America 2016 Final defeat.

iLOT Bet will continue to give the best odds and encourage everyone to win more with the free coupon to place a bet at any time. Try iLOT Bet today and increase your chances of winning big.