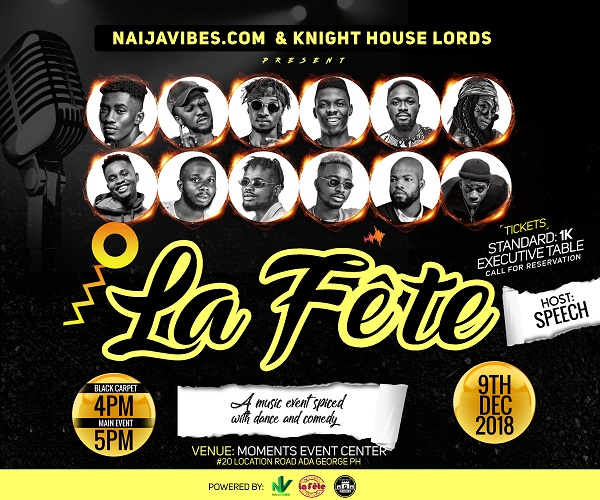 The event which would hold on the 9th of December, at the prestigious Moments Event Centre, Port Harcourt, River State will be hosted by the monster host, Speech.

As the name implies, La Fete which is a french word for “The Party” will be the party of the year as it is packed with live musical performances from buzzing artists like Dr Barz, Abobi Eddieroll, Ajebo Hustlers, Kella, Weri, Lil Dex, Zez, Daas, Rave, Benjiszzy Zaakii, August Chuks, Blaqboi, G-win, Mr Kleff, Spencer and a host of other artistes.

However, La Fête is not just a musical event because it is spiced with dance and comic relief from hilarious comedians like Mr Funny, Bethram, Busy Mouth, Lennice, Mc Justice and Mr Laff Me.

And not leaving out amazing disc jockeys like DJ Donak, DJ Dewik, DJ Stunner, and DJ Valentinho who would be spinning the wheels.

La Fête is set to be a blast.