Nigerian raving artist, Portable has come out to thank Olamide and his promoter, Kogbagidi for their help and assistance in his music career.

The Nigerian singer and Zazoo crooner, Portable released his hit song, Zazoo Zehh towards the end of last year. The song was acknowledged by most music lovers across the country, the song has gained millions of streams across all music platforms.

However, the release of the song came with a lot of controversies. Recall, Portable called out hypeman, Poco Lee for monetary and intellectual property theft though this was later resolved.

Recently, the singer, Portable was seen on a video with a baseball bat asking that his promoter, Kogbagidi, provide the car he was gifted by a fan that he was being cheated on.

This incident made Portable and Kogbagidi unfollowed each other on Instagram. However, with the help of Olamide and others, they have both resolved their differences.

Portable took to his Instagram Story to thank Olamide, Kogbagidi, and others for their help in his musical career. 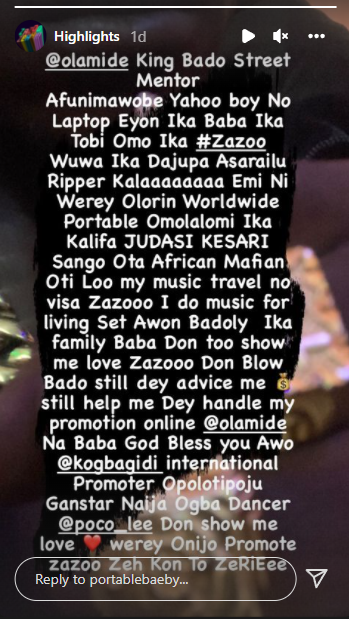