D’banj amid his over zealous fans

Meanwhile, despite the memorable events that preceded the night, a few ugly ones which hinged on  insecurity nearly marred the show. Nigeria’s pop singers, including D’banj, Wizkid and Psquare’s Paul Okoye, will live to retell their horrible experiences after they separately escaped being mobbed by their South African fans who either wanted to take pictures with them or have the music acts spray some Dollars at them.

Wizkid was the first to fall victim. The ugly experience happened while the music star was stepping out of the Durban International Convention Centre, venue of  the event.

Accompanied by some of his men, an army of his South African fans besieged him, demanding to take pictures with him. And in seconds, they started manhandling him. But for the quick intervention of his men who struggle to lead him away, they would have mobbed him. 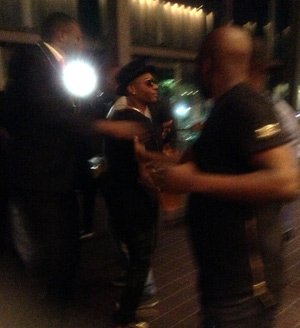 Wizkid being protected by his bodyguards

Also, D’banj suffered similar fate when he was leaving the venue after his performance. He was accosted by some young men suspected to be Nigerians residing in South Africa. While walking down the staircase, the young men who were speaking Yoruba blocked him, pretending to be his fans. But when D’banj could no longer bear it, as he reacted violently, one of them poured him a glass of wine from the staircase.

For P-square’s Paul, he was besieged while walking the red carpet after event. He struggled his way out of the crowd that milled around him like bees on a honeypot, pressing to touch their idol. It was an experience the music stars would not forget in a hurry.

But if the organizers had provided adequate security for the celebrities, this ugly incident wouldn’t have happened in the first place.